We drove toward Bennett, Colorado to look at a horse.  Our friend, Lindsay the vet tech, joined us – I wanted a seasoned opinion.  As I reflected on the journey that led us to this place, we talked about my having been raised on a Thoroughbred breeding farm in Kentucky, then when my parents divorced, horses no longer being a part of my life.  Although they had left an imprint on my soul.

I felt it on the day that my wife and I saw the miniature horse at the vet two years earlier.  I assisted in getting him into the exam area, and felt him relax and let go of his tension at my touch.  In that moment an old fire reignited.  After some research, and finding a horse where we had “that connection”, we came home with a miniature stallion (a World’s Top Five stallion), and his feisty gelding son.  Smaller, and easier to care for and train, they seemed a great fit.  I trained the stallion to harness, and got both a show cart and lightweight Hyperbike cart, and took to the trail.  He is a mighty package in a small size and won the first Combined Driving event we entered.  But there were trails my little man could not take me.  Was it crazy to want another horse, a saddle horse?

I looked at all kinds of gaited horses, and was about to despair at finding a decent one in good health, with a good spirit, then I heard about a string of Tennessee Walkers in Bennett.  We went to see and possibly ride them, expecting another a disappointment.  When we pulled up, we saw horses in tough shape.  The closer we looked at them, the worse they looked.  They looked like throwaways.  There were ribs showing, scars all over, and sunken loins matched with eyes that showing they had given up.  Our vet tech friend was incensed, and privately told me she was ready to report this fellow.  I shared her outrage, but since we were there…

None of these horses even had a name.  No papers, no history, and no names.  That was a telling sign of the care they were getting.

The best looking of the bunch, a TWH over 17 hh, the herd bully, was already spoken for.  I rode one, and then another, after the seller put a saddle on them and warmed them up.  Nothing so far.  There was one horse left, a bay and white pinto, with scars and hair falling out.  His feet were overgrown, shoes held on with a total of eight nails.  The seller admitted he was a little 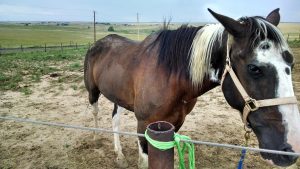 afraid of him.  He warned me that he was just “green broke” even though he was around 7 years old.  He put a severe twisted wire long shank snaffle bit and an ill-fitting saddle on him, and swung a leg over.  The whites in this horse’s eyes showed the horse had the same opinion of the rider as the rider did of the horse.

The horse took off in a very strange, “walk-a-lope” gait that made me think he was lame.  He was tough to handle and spooky.  The seller came back for me to get on.  I was an extremely green rider then and my riding experience could be measured in hours.  What could go wrong?

I swung a leg over him, and simply asked that he stand.  I exhaled, and I could feel him relax like that little gelding at the vet.  I had learned soft hands through driving a miniature, and I gave him the slightest leg.  We walked around, over logs, circled both ways.  We went on a little trail with the seller’s warning, “be careful now, he is scared of water.”

We ended up girth deep in water, and he was playing in it.  He gaited nicely, then that funny walk-a-lope, then back down to a nice gait.  He did everything I asked, and it was like we had a connection.  I was falling for the ugliest, roughest, greenest horse in the bunch, with a goofy gait and possibly lame.

On the drive home, I kept thinking that this was NOT the way to buy a horse.  But that night, I felt this horse seeking me.  I don’t know how else to put it.  He was looking for me, and I felt it clearly and sharply.  I woke up with a start, and told my wife, who said, “you have to get him now.”  I said it would depend on the vet check the next day.

At the vet check, the vet said that the level of care was not good, just shy of reportable.  His feet had overgrown his shoes, one foot was ½” out of balance, and fluid had accumulated on the right front fetlock.  He was grade 2 lame as a result.  Discussing with the vet, she felt the foot condition might – and she stressed, ‘might’ – explain the lameness score.  Other than that, he was in surprisingly good health, not counting a thin coat and very poor body condition.

I took a chance that I would counsel others to avoid.  The next day, he was in my trailer headed home.

My farrier was outraged at the condition of his feet.  I fed him 12 QUARTS (not a misprint) of good pellet feed a day with all the grass hay he wanted.  Within a few months, this bay and white pinto turned BLACK and white, with a luxurious thick coat.  I gave him a proper fancy name: Foxhaven’s Medicine Man (because of his walkabout in the spirit world, seeking me), barn name, Dakotah.  No scars remained, and he filled out and muscled up nicely.  We took lesson after lesson with a dressage trainer who did eventing.  With a kind bit and a custom saddle, he was comfortable, happy and we learned more in that year of lessons than I can describe.

Every time we went on a trail ride, it seemed like he not only loved every minute, but we forged a connection that allowed an ever-softer cue.  My farrier suggested that his athleticism and good bone really would be a match for a NATRC (North American Trail Ride Conference) competitive trail ride.  We entered our first one, were first in our class and I was hooked.

Dakotah continued to mellow, having become quite sure footed on the trail, and ever more trusting that when I told him something was safe, it really was – and that I “have his back”.  We continued to train and condition, and his progress has been amazing.  He is no longer afraid of people nor avoids them.

I registered him with the American Indian Horse Registry based on conformation, giving him more than ‘grade’ status.  In his first year with NATRC, he was the National High Point American Indian Horse in NATRC and we just learned he earned that for the second year in a row in 2017.  He also won his 2017 Region 3 Novice Championship.  I am currently in the process of training him to harness as well.  His trust of me, and mine of him, is deepening with every ride, as we learn deeper communication and I learn better horsemanship.  As he has built up muscle and been in top condition, I learned that he is also a speed racking horse – a very fast one.

I am struck by how apt his name is: in the Lakota tongue, it is Wicasa Wakan, one who is spirit-connected.  He is for sure my Medicine Man.  Just a throwaway horse?  Not this one.  I found my heart horse for sure in him, because he had the courage to reach out in a dream. 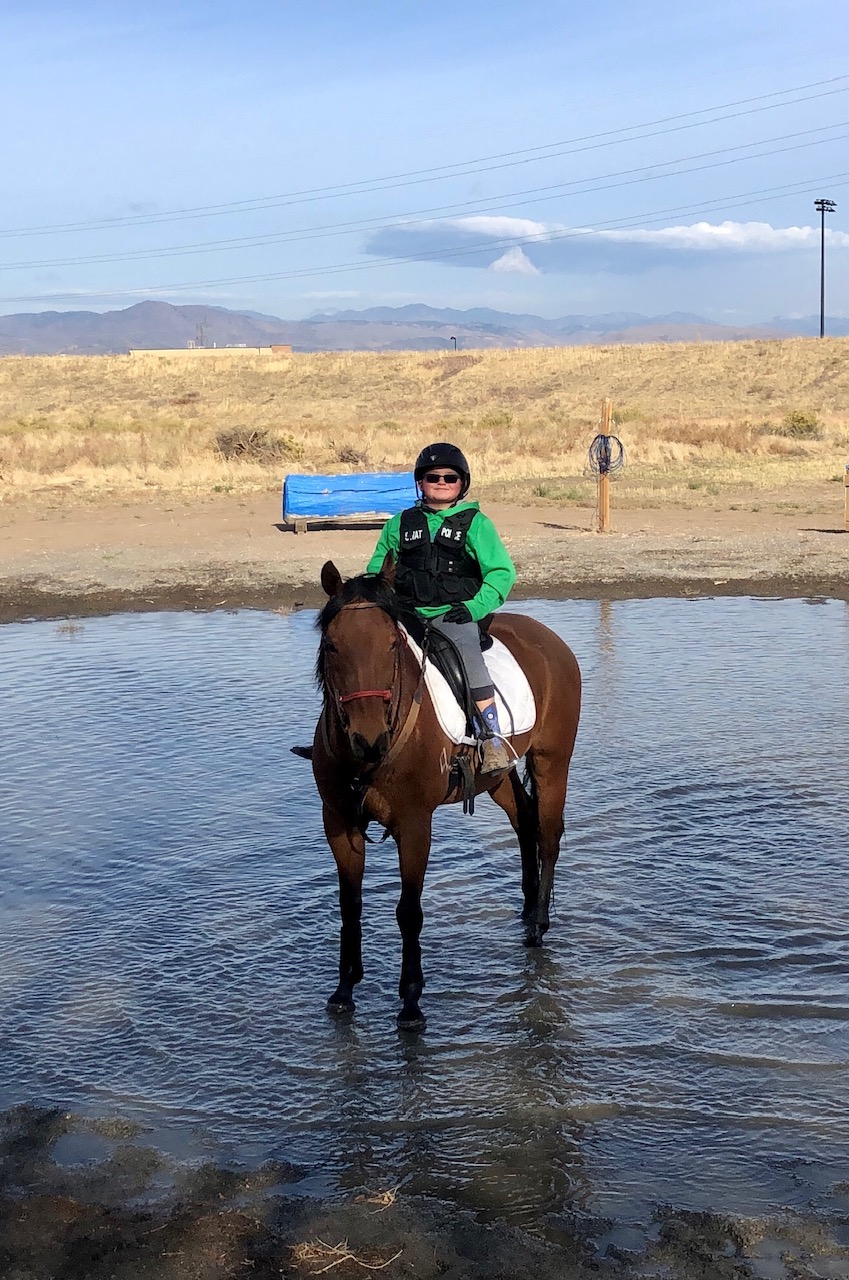 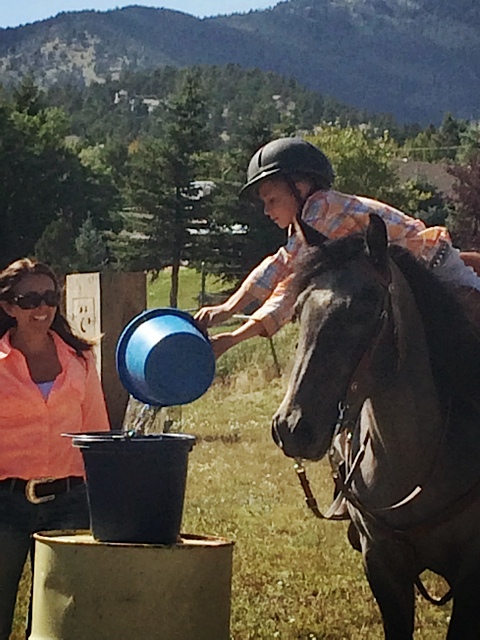 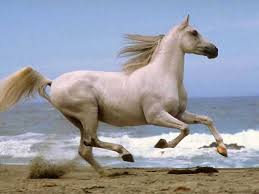 National (& Colorado) Impact of Equine Industry on US Economy