Looking back on our life with horses, it is fascinating to trace the steps from one to the next that results in our journey in, and out of the saddle.

Like many of us horse people, the “horse crazies” took Chris Sletten of Evergreen at an early age. She remembers back to a house they lived in when she was three when she first started asking for a horse.   At eight, her parents relented and her family moved out into the country between Seattle and Tacoma, Washington. With ten acres and an old farmhouse, Chris’s parents found her first horse Smoky. Her parents did not know where to start with Smoky, so they had the neighbor boy come over, saddle Smoky and take her riding.

Over time, Chris insisted that her brother and sister needed horses too, so the herd grew. As a teenager, she participated in Gymkhana’s with a local horse club. Without a horse trailer, she and Winnie Mae, an Arabian/Quarter Horse cross, would head out to the game days on horseback with instructions from her mom that she needed to be home by the time the cars switched on their headlights.

In High School, Chris was engaged to her now husband Jeff and moved to Colorado Springs where he was in the Air Force Academy.   After about eight years of moving around after graduation, Chris and Jeff settled back in Evergreen, bought some land and got back into horses. Chris had always had a love for the Arabian breed and after losing one horse to founder, she called all of the Arabian breeders in the Denver phone book looking for a pretty little bay mare.   Someone called her back that afternoon and she found her horse Savannah that she has now. Savannah is by the Polish Arabian stallion Gondolier, bred by Magness Arabians.

Savannah was five at the time and while calm, gentle and sweet on the ground, she had a propensity to buck Chris off and did so many times. Chris then learned about the Natural Horsemanship trainer, Pat Parelli through neighbors who had been going to his clinics. Chris explains, “I had never taken lessons, I had always just ridden. I didn’t know that if a horse had problems you could fix them. When I got into Parelli I thought, ‘holy smokes you mean I don’t have to live with that, I can fix it?’”

Chris started working Savannah through the Parelli levels of training, which changed both of them dramatically for the better. Savannah was by nature a reactive, “go-aholic”, but when they started using the methods that are well explained and laid out in Parelli, Savannah started thinking and not just reacting.

Just to give you an idea of where they started, Chris saw a person at a Parelli cow clinic one year and then again four years later at a Craig Cameron clinic. She said to Chris, “I can’t believe what you have done with your horse.  I would have sworn that she would have gone to the glue factory and you would be dead!”

Parelli also has broken down horse personalities into four categories called “Horsanalities”. Savannah fit the description for the right brain extravert to a “T”. Learning her personality type helped Chris accepted her for who she was, another huge step in their relationship. “She is my horse and I love her. I know she has her quirks, without a doubt, but she can’t help it. “

Chris found the Parelli ground work and playing with her horse at liberty to be incredibly fun and beneficial to both of them. If you are unfamiliar with liberty work, it is working with your horse free of any physical means (halters, lead ropes, tack) to connect you to them other than your connection mentally. In a sense, you set them free to have them play and engage with you through mutual trust. Chris explains, “It is like dog agility in a way. You use your body language and talk to them like you are a horse. You point and say go there and they go. Just handling them in general becomes easier because they are watching you and they know what you are asking them.”

From there Chris found a Tommie Turvey video on teaching your horse tricks and she taught Savannah to bow. She then wanted to teach her to do the Spanish walk and started out by “google-ing” it. That lead her to take some lessons with Spanish born trainer/instructor, Manuel Trigo to improve what she started. About this time, Emma, Chris’s young Quarter Horse she had bought as a foal was ready to start learning the Spanish walk as well as liberty work.

With a new love for the principles of Classical Dressage she learned with Manuel, Chris found the Western Dressage Association. A board member since its Colorado beginnings a couple of years ago, she has done liberty demonstrations at a Western Dressage clinic as well as for the Rocky Mountain Iberian Horse Club. With Western Dressage Chris states, “I feel like I have the best of all areas of horsemanship… and I still get to dress like a cowgirl!”

Lately, Chris has started working with Laura Amandis (rosinback@aol.com), who grew up in the circus performing. Laura came to the area to perform with Gladius the Show that performed at the 2014 Rocky Mountain Horse Expo and at Jefferson County Fairgrounds and has stayed in the area. Chris has had a blast working with Laura and learning to perfect her presentation and performance as she is playing with her horses at liberty. Having a second person in Laura has also helped Chris progress her work with both horses simultaneously at liberty.

Learning to improve her communication with her horses has become a lifetime pursuit for Chris and she greatly enjoys attending clinics and taking various lessons. She finds her social outlets tied into enjoying horses with others and expressed, “I don’t know who I would be without horses, they are so much of who I am, I wouldn’t be me anymore. I love everything about them. Mucking the stalls, cleaning, feeding, the way they smell. I don’t know what it is (about horses), but I’ve always had it (the horse crazies)!” Heather McWilliams © 2014 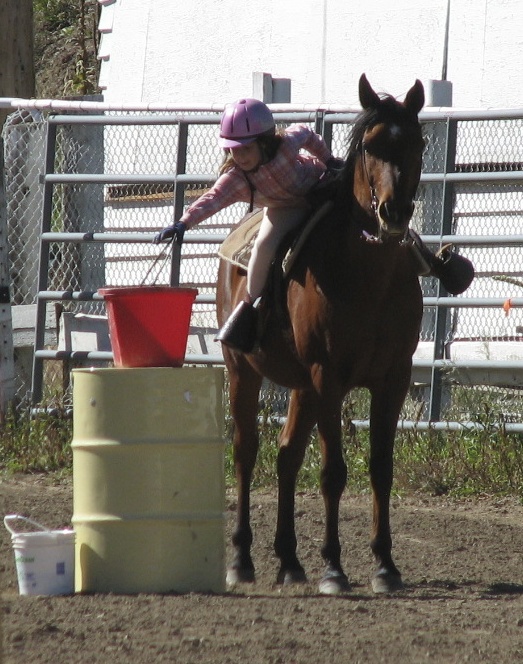